NBA star Bradley Beal made some misleading comments — shared in viral video clips — about the effectiveness of COVID-19 vaccines. No vaccine is 100% effective, but clinical trials and studies show the COVID-19 vaccines are very effective at preventing illness, particularly serious illness, including for those previously infected, such as Beal.

The NBA, which starts its season on Oct. 19, isn’t requiring players to be vaccinated against COVD-19. But unvaccinated players will undergo regular testing, including one test on practice or travel days and at least one test on game days.

During an NBA media day on Sept. 27, Bradley Beal, an All-Star guard for the Washington Wizards, said that he has not received a COVID-19 vaccine due to “personal reasons.”

Along with asking questions about the vaccines at the press conference, Beal made some misleading comments about their effectiveness. Video clips of his comments on Instagram, and posts about the video on Facebook, have reached over 97,000 interactions, according to CrowdTangle analytics.

We’ll address Beal’s questions and clear up some misinformation that may have been spread.

Beal said he “would like an explanation” as to why people who have received vaccines “are still getting COVID, if that’s something that we are supposed to highly be protected from.”

However, so-called “breakthrough” cases of COVID-19 after vaccination are to be expected — perhaps even more so now because of the more contagious delta variant of the virus.

Beal further questioned the effectiveness of the vaccines, saying, “‘Oh, ‘it reduced your chances of going to the hospital.’” Beal then paused and shook his head before continuing: “It doesn’t eliminate anybody from getting COVID, right?”

It’s not clear what Beal meant by shaking his head after saying if the vaccine reduces your chances of going to the hospital. But vaccination does reduce the likelihood of hospitalization, serious illness or death due to COVID-19. (See chart below, “COVID-19-associated Hospitalizations Among Unvaccinated and Fully Vaccinated.”) 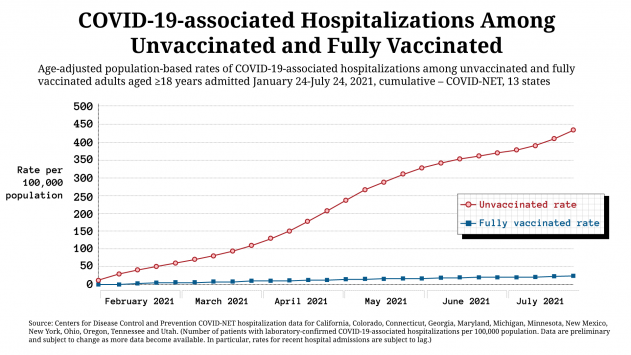 The CDC has said “studies suggest that vaccinated people who become infected with Delta have potential to be less infectious than infected unvaccinated people” and that more data are needed.

However, more unvaccinated people in a population leads to more virus transmission, as the Children’s Hospital of Philadelphia explains. Vaccinated individuals are much less likely to be infected with the virus in the first place.

Vaccine Benefits for Those Previously Infected

Beal, a member of the 2021 NBA All-Star team, missed the opportunity to play in the 2021 summer Tokyo Olympics due to health-and-safety protocols with Team USA after testing positive for COVID-19 in July. He also acknowledged at the press event that he had contracted COVID-19 earlier in the year.

Beal is right in saying he should have some natural immunity, but, as we have written before, the previously infected can benefit from getting a COVID-19 vaccine. In August, the CDC released a study that found unvaccinated Kentucky residents who were infected with SARS-CoV-2 in 2020 had a 2.3 times greater chance of being reinfected in May and June 2021 compared with the fully vaccinated.

E. John Wherry, director of the University of Pennsylvania’s Institute for Immunology, told FactCheck.org in a phone interview that the vaccines improved the immune response in individuals who had previously been infected by raising the levels of neutralizing antibodies.

“Some people actually have fairly low antibody responses that are not sufficient to neutralize the virus, especially variant viruses. When you vaccinate them uniformly, you get high antibody titers [measurements] and high neutralization titers, so there’s an improvement in at least one of the key metrics of immunity following vaccination,” explained Wherry, one of the lead authors of a study looking at the immune responses to the mRNA vaccines in individuals with and without previous infections.

Beal’s wife, Kamiah Adams-Beal, tweeted in January, “Yalllll go right ahead and play around with that vaccine if you want to.” In a separate Instagram post, she seemed to imply that baseball legend Hank Aaron’s death earlier this year was caused by the vaccine. As we’ve reported, the medical examiner’s office in Fulton County, Georgia, attributed Aaron’s death to natural causes.

Beal also expressed concerns about side effects of the vaccine. “Some people have bad reactions to the vaccine. Nobody likes to talk about that. What happens if one of our players gets the vaccine and they can’t play after that or they have complications after that because there are cases like that. But I feel like we don’t talk about those as heavily because they are so minute maybe? But they are existent.”

The CDC reports that many people who get the vaccines experience mild side effects — such as pain at the injection site, a headache, chills or fever. The CDC also explains a “small number of people have had a severe allergic reaction (called ‘anaphylaxis’) after vaccination, but this is rare. If this occurs, vaccination providers have medicines available to effectively and immediately treat the reaction.” There have been 2 to 5 cases of anaphylaxis per 1 million vaccine doses administered, according to the CDC.

The CDC is also continuing to investigate the relationship between the Pfizer/BioNTech and Moderna mRNA vaccines and rare cases of myocarditis (an inflammation of the heart muscle) and pericarditis (an inflammation of the surrounding lining of the heart), particularly in males ages 30 and younger. As of Sept. 22, the CDC and FDA have confirmed 892 reports of myocarditis or pericarditis reported to the Vaccine Adverse Event Reporting System. Most patients “responded well to treatment and rest and quickly felt better,” the CDC notes. More than 370 million doses of the Moderna and Pfizer/BioNTech vaccines have been administered in the U.S.

The day after the NBA press conference, Beal said he is “still considering getting the vaccine.”

Although the NBA is not mandating vaccination for all players, individual teams have the authority to require vaccinations for players and staff during the season. Players in New York City and San Francisco are required to get vaccinated in order to play in home games, unlike Beal and the Wizards.

Michele Roberts, outgoing executive director of the National Basketball Players Association, told Yahoo Sports’ Vincent Goodwill in July that 10% of the league’s players remained unvaccinated. The WNBA announced in June that 99% of its players were fully vaccinated.