Studies have shown that COVID-19 vaccines have prevented severe disease and deaths. But bogus claims that they don’t work continue to circulate online. One claim relies on a misleading graph showing cumulative deaths in the U.S., but omits information about the number of deaths among the vaccinated versus unvaccinated since the shots became available.

Vaccines have prevented deaths and severe disease from COVID-19, studies have shown.

One early study funded by the National Institutes of Health estimated that vaccines had prevented nearly 140,000 deaths in the U.S. by May 2021.

A more recent analysis that looked at the first year the vaccines were available found that, without the vaccines, there would have been an additional 1.1 million deaths and 10.3 million hospitalizations in the U.S.

But falsehoods claiming that the vaccines don’t work continue to spread on social media.

Physicians for Informed Consent, a California-based nonprofit that was organized for the purpose of educating “the public on natural immunity, vaccine risks, and informed consent,” has shared a post that’s designed to look like a fact-check. But, instead of being factual, it spreads this claim (emphasis original): “CDC data show mass vaccination with the COVID-19 vaccine has had no measurable impact on COVID-19 mortality in the U.S.”

Although the post looks credible — with a graph and information attributed to the Centers for Disease Control and Prevention — it’s actually deceptive.

We’ll start with the graph that accompanies the post.

To support its claim that the vaccines have had “no measurable impact” on deaths from COVID-19, the post includes a graph that shows steadily increasing deaths from March 2020 to January 2022 in the U.S., with a marker noting when the vaccines were introduced in December 2020.

But the graph shows the cumulative total of deaths over the course of the pandemic. So, the line will continue to rise as more deaths each day are added to the total. The graph doesn’t tell us anything about the effect of vaccines on COVID-19.

A more useful graphic would show the rates of cases and deaths each day. Below, we see that the rate of death was much higher relative to the rate of cases before the vaccines became widely available through the spring of 2021.

We also asked Dr. William Schaffner, professor of preventive medicine in the department of health policy and professor of medicine in the division of infectious diseases at the Vanderbilt University School of Medicine, about the graph used in the post and he said, “The other thing that we need to remember — this has not been one pandemic, in a sense, it’s been three.”

First there was the original strain of the virus that causes COVID-19, then in the summer of 2021 the delta variant caused a new wave of infection, and then in December the omicron variant became dominant and caused a spike in cases.

Those two variants, which emerged in the U.S. after the vaccines had been introduced, were much more transmissible. So, Schaffner noted, part of the reason for the rise in infections related to each of those variants is “just a matter of numbers.”

But, proportionally far fewer people ended up dying, as can be seen in the graphs above. While vaccines are not the only reason for this, they are a large reason.

Now, as for the other supposed support for the claim, the post says: “In the nine months before the introduction of mass vaccination (April 2020 through December 2020), there were about 356,000 COVID-19 deaths. In the nine months after the introduction of mass vaccination, there were 342,000 COVID-19 deaths (January 2021 through September 2021) and 182,000 additional COVID-19 deaths occurred in the four months that followed (October 2021 through January 2022).”

Those numbers are basically correct, but what the post neglects to mention is that those two nine-month periods were very different. In much of the first period, some parts of the country were under stay-at-home orders as well as masking and social distancing mandates. In the second, many more people were out and about. Simply comparing deaths from those two time periods provides no insight into whether the vaccines saved lives.

“There were so many variables that were in play in this time,” Schaffner said.

“The before and after analysis assumes that circumstances were the same, but they weren’t,” he said.

Even more critically, most of the deaths that occurred after the vaccines became available were among unvaccinated people.

A study looking at the effectiveness of the vaccines against both the delta and omicron variants of the virus that causes COVID-19 was published in the Jan. 28 issue of the CDC’s Morbidity and Mortality Weekly Report. The study found that, overall, those who had been fully vaccinated and boosted fared best against each variant, while those who were unvaccinated fared worst. 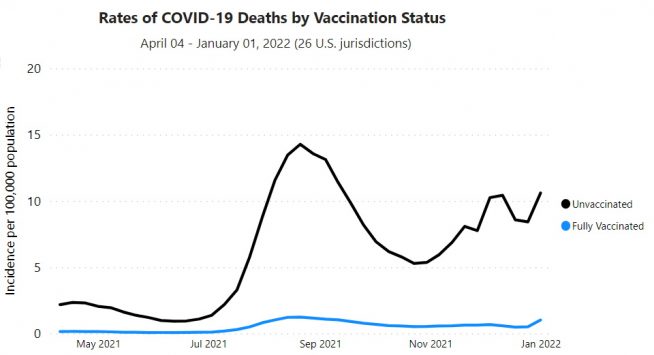 The graph above details COVID-19 death rate by vaccination status, showing that those who were unvaccinated have made up the majority of deaths since vaccines became widely available in the spring of 2021.

Physicians for Informed Consent didn’t mention the difference between the death rates for the vaccinated versus the unvaccinated because “it is an unproven hypothesis that appears to be based on data sets dependent on the testing practices of the subjects observed,” Greg Glaser, general counsel and National Coalition director for Physicians for Informed Consent, told us in an email.

He cited the second of five limitations explained in the recent CDC study, which said, “this ecological study lacked multivariable adjustments, and causality could not be determined. Possible differences in testing, infection-derived immunity, waning of vaccine-derived immunity, or prevention behaviors by age and vaccination status might partly explain differences in rates between groups; trends are likely affected by temporal changes in testing or reporting.”

But Schaffner explained that what Glaser had pointed to was just a customary recognition of limitations that is included in scientific studies.

“Here you have people overinterpreting pretty standard” language, he said, explaining that it’s called a limitations paragraph. It’s an acknowledgement that you can’t do a perfect study out in the world the way you might be able to in a lab.

“You have to acknowledge there are things out in the hurly burly of the world,” he said, and including a limitations paragraph is a way of saying, “no study is perfect and our study isn’t, either.”

Schaffner noted that Physicians for Informed Consent did not include a limitations paragraph in its post.

Moreover, other studies, which have tried to control for a variety of differences in populations, have repeatedly found the vaccines to be highly effective. One U.K. study, for example, which evaluated vaccine effectiveness by comparing the vaccination status of people who tested positive for COVID-19 to those who had symptoms but tested negative, found the two-dose Pfizer/BioNTech vaccine to be to 88% effective in preventing symptomatic disease against the delta variant.

The bottom line, Schaffner said, is that “public health authorities, infectious disease specialists around the world in countries of various cultures and languages have all looked at the data… and there is, in that professional community around the world, an enthusiastic acknowledgement that these vaccines are very effective in preventing severe disease.”